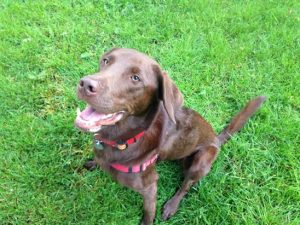 Meet Carl! Carl is a one year old Chocolate Lab who was in recently because he wasn’t eating and was lethargic. Dr. Walker examined him and found that he had a low grade fever, abdominal pain and was dehydrated. After running some tests, Carl was diagnosed with Salmon Poisoning. Salmon Poisoning is a disease caused by the ingestion of raw fish which can result in any or all of the following: vomiting, diarrhea, fever, swollen lymph nodes and/ or appetite loss. Left untreated, it can be fatal. Happily, Carl was treated successfully and is doing great!

Salmon Poisoning is caused by the ingestion of raw fish in the Salmonid family (which includes Salmon, trout, lamprey, sculpin, redside shiner, sturgeon, candlefish and the large-scale sucker fish). This disease is most prevalent from northern California to the Puget Sound, as well as the coastal streams and rivers in the Pacific Northwest (yes, including our own Willamette and Sandy rivers!). Disease is caused by a rickettsial organism, Neorickettsia helmonthoeca, which infects a fluke, Nanophyetus salmincola, which is imbedded in the fish.

Once exposed, symptoms usually appear within 6-10 days after ingesting affected fish. Symptoms can range from mild to severe and may include fever, depression, anorexia (loss of appetite), vomiting, diarrhea, weight loss, lymphadenopathy (swollen lymph nodes) and nasal or ocular discharge. It may be fatal if left untreated. Treatment consists of managing dehydration by the administration of fluids, controlling nausea and administration of a specific antibiotic to kill the bacteria and a dewormer to kill the parasite.

The best treatment is Prevention! Don’t feed raw fish to your dog, dispose of any fish carcasses securely in the garbage, monitor your dog’s activity at the beach or river and notify your veterinarian immediately in the event of exposure.

We are doing everything we can to ensure the safety of our patients, staff and visitors. From the beginning of the COVID-19 (Coronavirus) outbreak, we’ve been listening closely to the Centers for Disease Control and Prevention (CDC), and other agencies to stay up to date with the latest information.

If you have recently traveled to areas where there are ongoing outbreaks of COVID-19 and/or develop fever with cough or shortness of breath, or if you have had contact with someone who is suspected to have COVID-19, please stay home. We are continuing to keep our office safe and sanitized for you and our amazing staff.

We are currently implementing a curbside service for our clients where:

1)You can call from the parking lot as you arrive
2)A technician will come get your pet/history
3) The doctor will connect via telephone regarding treatment
4) Your pet is brought back to the car without any need for you to exit your vehicle.

Please feel free to contact us if you have any questions or concerns.

Call Us Text Us